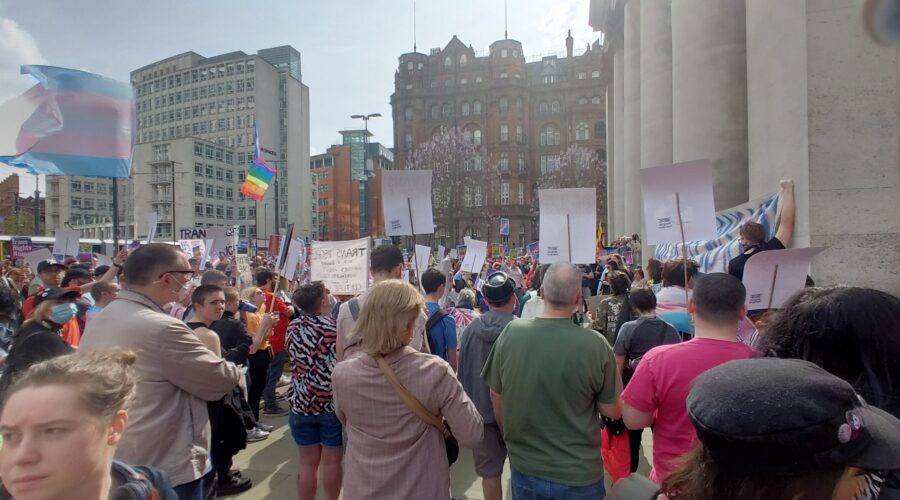 Theresa May’s government pledged to remove conversion therapy in 2018 but the current Conservative government is very anti trans, something that was brought to the forefront in my eyes when the tory party gave the LGB alliance, an anti-trans group, a voice at their party conference in Manchester, 2021. 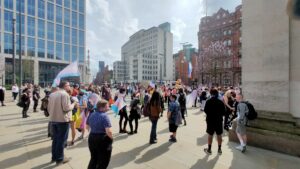 This isn’t the first demonstration I have been to in Manchester as there was one in October 2021 against the tories.

It’s a beautiful day in Manchester, (when isn’t it?) and I turned up in St Peter’s Square about 2:30 and there was already a few hundred people there.

I milled around talking to people until the event officially started at 3 p.m. when I would say there was probably over a thousand people there, and still more arriving!

Just as they started speaking there was a bit of trouble as two men turned up protesting in favour of conversion therapy. I’m told was one of the local Tory boys and his boyfriend. I know his name but it’s inconsequential, as was he!

He was shouting about his right to protest, and very quickly shouted down by the crowd and their placards removed.

Police eventually took him away after much remonstration, and what I did find amusing was one of the members of the Trans protest stood behind him with a homemade banner, which said “Do not listen to this man” with a big arrow pointing at him.

He held this above him all the time the police spoke to the man.

Protesting, basically in favor of conversion therapy, is like protesting in favor of torture. It’s a pretty piss poor argument in my humble opinion.

I did think it was quite ironic as they were escorted away that they shouted “Bye, homophobes” and “LGB with out the T”

It was pointed out during the demonstration that Trans people are more likely to be assaulted than CIS gender women and the bathroom argument is a red herring.

There was a wide variety of people there today, not just people from the LGBTIQ+ community. Some of the people that I spoke to were straight married couples who were there because they could not understand, and did not agree, with why the government would seek to not include transgender people in the ban on conversion therapy.

At 3 pm there was many numerous speakers, including the actress Annie Wallis and Professor Stephen Whittle OBE FAcSS.

I’ve heard them both speak before, and they are inspiring people.

The more I listen to these two people the more I realise that I cannot just sit idly by and let politics take its course. I must let my voice be heard and now that voice is in the form of articles such as this blog and attending events.

The demonstration was still going on at 4:30 p.m, when sadly I had to leave.

I haven’t spoken to some of my friends who stayed to the end of the event, but I believe the Anti Conversion Therapy demonstration, Manchester, passed without incident apart from the issue with the man at the start.

The ban on conversion therapy must be a total ban, no exceptions.

As trans people are already vilified for basically being themselves, this is just another block put in the way of transgender people who are already marginalized by the medical profession and government institutions.