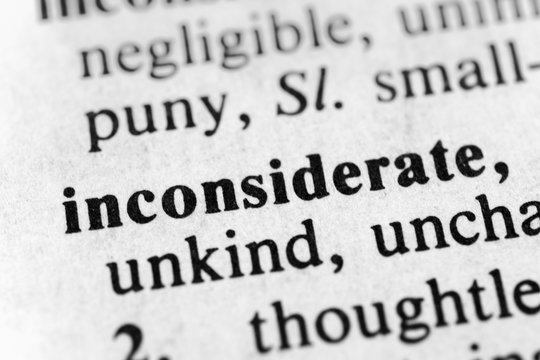 I am all for everyone doing their own thing in life, but I also can’t stand those inconsiderate fucks who do what they want just to piss everyone else off or even to the point where those around them actually want to put a pair of scissors through their head.

Yes, folks, I’m talking about those people who are so concerned about their own lives that they really don’t give a shit about those around them!

Parking the family tank, 4×4, on a zebra crossing because you’re an inconsiderate fuck who can’t be arsed walking 10 yards to buy cigarettes!

Leaving said urban tank with the engine running for 20 minutes while I run my errands. “It’s okay my kids are in the car!”

Shouting/arguing with your equally inconsiderate partner at 4 am while playing music at stupid volumes.

About motorbike owners revving their Ichifanny 500 at 7 am on Sunday morning because they’re warming it up. That’s hopefully so they can go wrap it and yourself round a tree somewhere!

Letting your dog bark all night then shouting abuse at other neighbors whose dog deems to bark after 10 am!

Living in an apartment block and everyone calling you a cunt behind your back because everything you do pisses everyone else off!