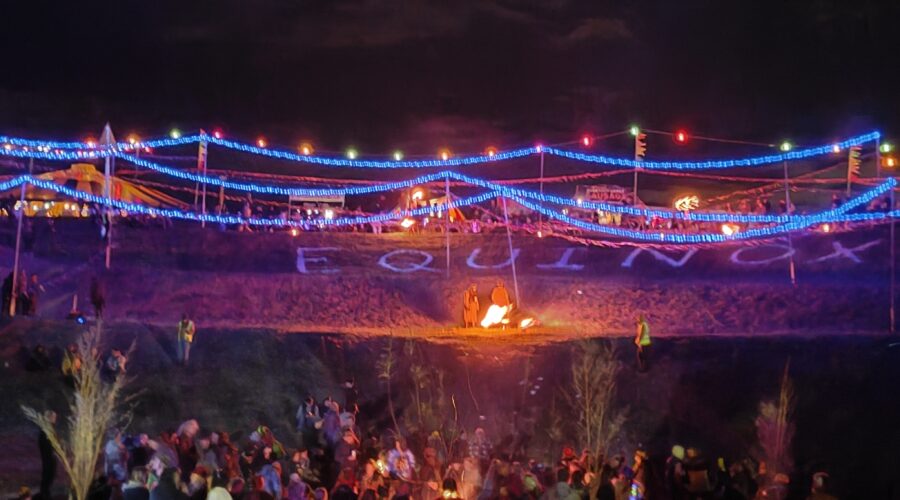 First off let me get this out of the way, the Equinox festival has been the best festival I’ve been to in the past few years. Images and Videos are at the bottom of the page.

Why Mikki? I hear you cry!

Well, just because of the relaxed vibe, the fantastic company, the new friends I’ve made, and because I was with so many of my existing friends.

The event is an eclectic mix of trance, psytrance, drum and/or bass music, along with a few live stages offering folk, reggae, and many other types of traditional music over the period of three days.

The site is well laid out and offers other activities such as a circus tent, firepit (with fire act performers), processions, and performers doing things like juggling, a troupe of drummers, stilt walkers, and generally fun things.

I’ve personally bought some of the best juggling balls I’ve ever owned. For those who know me well, know I can juggle, and brought clubs and rings with me to juggle while listening to the loud hypnotic beats of the festival.

I also bought them to wear my brain out as I do get hyper when at these festivals.

The campsite here isn’t too far from the main event and because the main stages are in a quarry the sound doesn’t travel. and I even managed to get a few hour’s sleep.

The wardens on the site are rather good as well and there is a moratorium on noise between 3 am and 9 am.

Arriving on Friday you know you’re in rural Lincolnshire as this is in the middle of nowhere and entry to the site did make me wince as the sound of the bottom of my car hitting the ground on numerous occasions was not something one enjoyed!

Check-in for me was very quick and painless as my tickets were scanned when I was in the queue and my wristband tied on for the weekend.

There is loads of camping but unless you are sleeping in your vehicle it’s not allowed on the campsite and once unloaded you must park it in the main car park. Fortunately, this was close by as well.

I had arranged to come with a friend with a van and we were going to sleep in this but alas at the last minute she had a family emergency, so I ended up being able to leave my car on the campsite as I had a sleep-in vehicle pass. Still, put my tent up as I’ve slept in my car on numerous occasions and it’s not something I look forward to.

Friday Evening was fantastic and I spent most of the night, (cough, weekend, in the Sunrise tent dancing to Psytrance music.

Saturday I spent all afternoon and evening dancing outside in glorious sunshine and in the evening ran around the site with my friend Sarah!

Sunday was amazing as I went all around the festival site and sat and watched some things I wouldn’t necessarily have gone and watched as I was with new friends all day.

The weekend for me has been kind of a blur but I know I’ve met some fantastic people, listened to some great DJs, and thoroughly enjoyed what has been the best event of the year for me… So far 🤪

I’m already planning to go back next year.