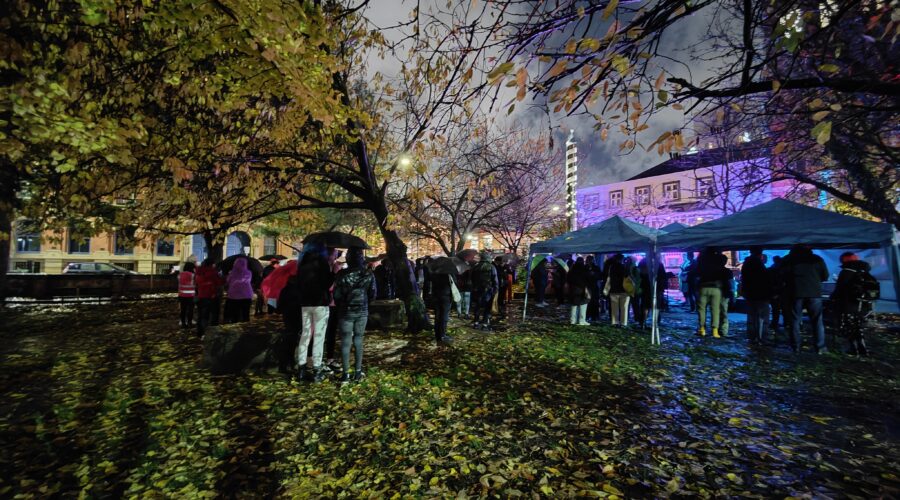 Well, it’s November the 20th and that means it’s Trans-Remembrance Day and I’m down in the gay village in Manchester at Sackville gardens for the annual Trans remembrance vigil which marks the end of Trans Awareness Week.

To date in 2022, there have been 331 reported killings of trans people worldwide. We need to remember these people.

In the UK, this includes the murder of Amy Griffiths, a 51 year old trans woman, in Droitwitch, Worcestershire, in January 2022.

Violence against trans people is sometimes driven by toxic ideals of masculinity founded on homophobia and biphobia.

On Trans Day of Remembrance, we need to reflect on how we can work together to end gender-based violence, harassment and discrimination in all their forms.

The vigil has been organised now for many years by the Sparkle charity and this year was no exception.

The event started 5:15pm in Sackville Street gardens in Manchester, by the now-damaged National Transgender Memorial, with organisers laying out lighting, amplification equipment, and several pop-up gazebo tents. Shelter for the anticipated rain.

There was around 100 people there this year and no doubt either uniformed about the event or put off because of the rain and cold.

I can’t tell you who spoke other than John Desmond Hamilton, who spoke on behalf of the Gay Village bar owner’s association, and the Actress Annie Wallace who plays a part in a TV show called, Holyoak’s, but is also a prominent Trans rights Activist.

It did rain several times; however, this is Manchester, and many came prepared with umbrellas.

Most of these people were murdered in their own countries!

What did shock me this year was the number of trans people murdered in the USA compared to last year.

As with previous years events, this was a respectful and somber event, marking respect for the Trans community organised by the trans community. Hello to those I met this evening, Louise and Julia, and to those I’ve met before.

I am going to say this year’s event was very poorly attended, especially when compared with last years event, because in my humble opinion, it was poorly advertised and there wasn’t even any information on the Sparkle website and the information on the Sparkle Twitter page only appeared on the 17th November which in my opinion is very short notice for lots of people.

Everything went without trouble, however at the start the police were present and there was someone present who was asked to leave. Those who know this man will know he has caused trouble at past Trans rallies in Manchester and is allied to the Conservatives. I won’t give him the satisfaction of mentioning his name, but he was asked to leave by the police.

A very somber event but one I will continue to attend as long as Trans people are being murdered for being themselves.

Violence, Abuse and killing of Trans people are on the increase worldwide, here are a few links I’ve managed to dig out:

Its been announced that Macclesfield Pride 2022 will take place this year on the 9th July in the Market Place in the centre of Macclesfield.

For those that dont know where this is in Macclesfield, this event will be located outside the town hall and the poost code is SK10 1DY and will be a fun filled day of events and attractions.

There will also be the finale of the MaccPride karaoke competion. Heats are being held in April and May at local Pubs and Bars. More details are below and on the the MaccPride.org website.

Macclesfield hasn’t had a Pride event now since 2019 because of the events of Covid, so this should be a good one folks.

Find out more about Macclesfield Pride 2022 by clicking on the MaccPride logo below. Or if your business wants to get involved then please send MaccPride a message via the Contact form on the MaccPride™ website.